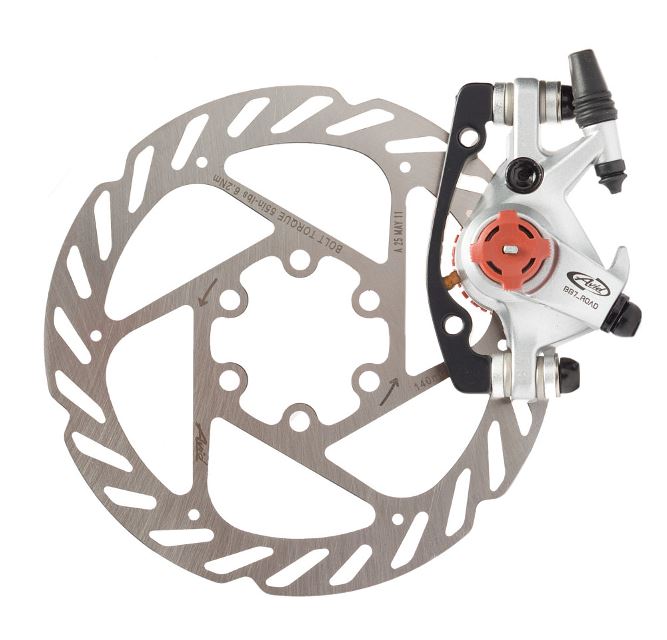 When disc brakes were first introduced into the cycling industry back in the late 1990's it was quite revolutionary. Unfortunately many bike frames and forks weren't properly designed to take full advantage of all benefits that disc brakes could provide. Modern disc brakes are incredibly powerful and thankfully bike frames & forks have evolved as well so they are capable of showcasing what these brakes can do. Some early disc brake compatible frames had mounts so a disc brake caliper could be installed but the aluminium/steel tubes of the frame were so thin that they would bend or reverberate obnoxiously when braking force was applied.

In order to install disc brakes onto a bike, the bike needs:
1) Hubs that can have a disc rotor installed onto them.
2) Some kind of mounting interface for the brake caliper on the frame and/or fork.

Disc brakes are typically actuated mechanically via a cable or hydraulically with the use of oil.
Mechanical disc calipers are cheaper and don't offer as much stopping power as their hydraulic counterparts.
Hydraulic disc calipers are generally more expensive but offer significantly more stopping power in addition to being self adjusting. The brake pads get thinner and thinner as they are used so the pistons in the caliper have to push them further in order to contact the disc rotor on the wheel. This process in automatically done in a hydraulic system but needs to be done manually on a mechanical disc caliper. Be careful you don't ignore your brake pads for too long though because they can wear quickly in certain conditions resulting in the metal back-plate of the pad contacting the disc rotor which can cause significant damage to both you and your bike.
If you replace disc brake pads at regular intervals you can typically expect to go through 2-3 sets before the disc rotor also needs to be replaced.
Most disc rotors are about 2mm thick when new. Once they wear to 1.5mm they should be replaced along with the brake pads.

Oil or any other lubricants are a brakes worst friend. Friction is the foundation in which brakes operate and lubricants act to remove friction so when they are combined, don't expect to stop in a hurry. Even our hands are covered in a thin layer of oil so try to avoid touching brake pads or disc rotors. If your disc brakes don't stop the way they used to or are making more noise than normal, they are probably contaminated with oil. In order to fix this the brake pads will have to be replaced and the disc rotor thoroughly scrubbed down to ensure no oil is left. Disc brake pads are porous so oil will soak into them and it cannot be removed.

There is currently no content classified with this term.